It can be useful at times to serve images that are generated using matplotlib within a Flask application context. This enables some lightweight, non-dynamic visualization generation.

Unfortunately, the defaults for matplotlib are terrible. Ugh! 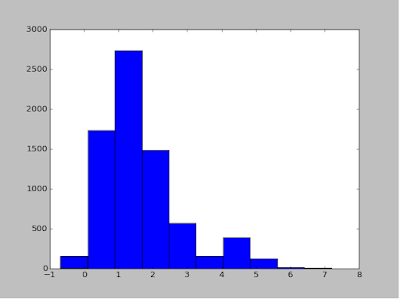 Enter prettyplotlib -- this library applies some of the work of several key influencers in the visual design space (Tufte, Brewer) to matplotlib. We eliminate chartjunk, add some better fonts, remove some redundant axes, add some better colours, and get the following: 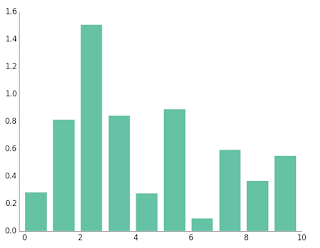 Much better! Now how do we go about serving this type of a plot via Flask? We will have to have two views, one that creates the image, and another one that serves the template that will contain the image. Our template, contained at templates/image.html should be as follows:

and our main application file, titled run.py, should contain the following:

The key is line 14 -- rather than calling matplotlib's plt.bar, we call prettyplotlib's plt.bar . Just like that, our output is much more visually appealing and easier to read!

For further reading, check out the following Stack Overflow thread about serving matplotlib files via Flask, this Gist about plotting a PNG using matplotlib (uses Python 2 -- you'll have to adapt it to use the io library if you'd like to try something similar in Python 3) and the official prettyplotlib documentation.
Posted by Rowan at 11:08 AM

Rowan
I solve data-related problems. Python, R, d3.js . Like my work? Check out my site at http://rowanv.com . Want to hire me for freelance work, or have questions you'd like to shoot my way? Contact me at rowan [at] rowanv [dot] com .